Thoughts on Clean Up

Here is a good article on the Clean-Up process by ace Assistant Animator Richard Smitheman.   Check out Richard's blog "The Pencil Test" . He has some of his Clean Up drawings posted that are very good examples of fine clean up work.


In this article (orginally posted on his blog) I feel that Richard gives an excellent description of the clean up process and how it relates to rough animation. This is the sort of thing gleaned from long experience that you don't usually come across in books. (in fact , there's very little solid information about the clean up process in any of the standard books. ) I've added some illustrations from my own collection to Richard's original article posted below. Click on any of the images to view them larger.


Some Thoughts on Animation Clean-Up
by Richard Smitheman


"I recently received a comment asking me how I do my clean-up, so I thought this would be a good opportunity to talk about some of my approach and philosophy when it comes to animation clean-up.

Firstly let me say that what you are about to read concerns itself primarily with feature animation although it does also apply to TV animation as-well . Also these are just my opinions and I do not claim to speak for others or the animation industry. These are more just my conclusions after twenty years in animation.

'Preserving as opposed to redrawing'

Firstly there's the tight, super on-model and generally great animated stuff you see from the best in the business. (James Baxter, Nik Ranieri, Eric Goldberg, Dale Baer, Ken Duncan) And secondly there's the looser, rougher animation (although can be equally as great, as in the exceptional work of Glen Keane) you see from almost everyone else. On many levels both these types of animation require a completely different approach. 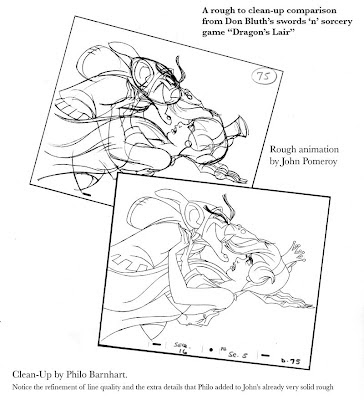 This is almost every clean-up artists ideal scenario, to work with a great animator who draws on model and and leaves very little open to interpretation. It lets you know exactly what they want, and it changes your approach to how you handle the scene.
Although in many ways no easier than the looser or more off model stuff (which some clean-up artists do prefer), tight animation will ultimately have a far greater chance of making it through clean-up unscathed.

But there is a hidden danger in all that tight work, and it's called tracing! But "tracing" is an inadequate word for the task at hand. I have heard many times people exclaim that "the animation is so tight you could trace it" and I believe this sets us up with a false sense of security. I have seen a lot of beautiful and perfectly on model animation get "traced" by good clean-up artists and yet loose something in the translation. There is a more subtle dance that goes on when working on such work and requires us to be even more vigilant. There is the potential to let your guard down and rely to heavily on what you think you see, the result is a scene that isn't as good as it could be. Part of the problem is the use of your own rough on this type of work. When animation is on-model and you need to "trace" (I hate that word!) it, the worst thing you can do is do your own re-rough for it. There is a far greater chance of capturing the subtlety if you work on a fresh sheet of paper and work straight in black as opposed to roughing it out with a col-erase first. Every generation you get from the original is going to allow errors to creep in. For a good portion of the animation clean-up on both this and my clean-up blog I worked almost exclusively straight in black with no rough done first. This is not to brag , but to demonstrate the need to stay as close to the original as possible while still doing what is required as a clean-up artist. There's also a huge bonus to working this way which is that I'm not doing every drawing twice, which from a production stand point is a very good thing. This does take some practice but with time this technique can be developed to the point that even the slightly more off model work can be redrawn intuitively and not require a rough first. One thing to look out for is the very tight, beautifully drawn, but off model animation which at first glance looks as though it falls into this first category. For the most part this animation needs to be treated like its rougher counterpart and redraw will be required.


Now we come to the second type of animation you encounter (and more often) as a clean-up artist and that's the looser, or rougher animation out there -- 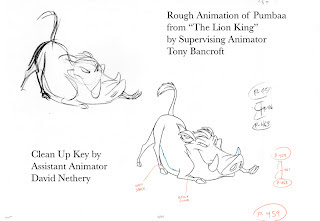 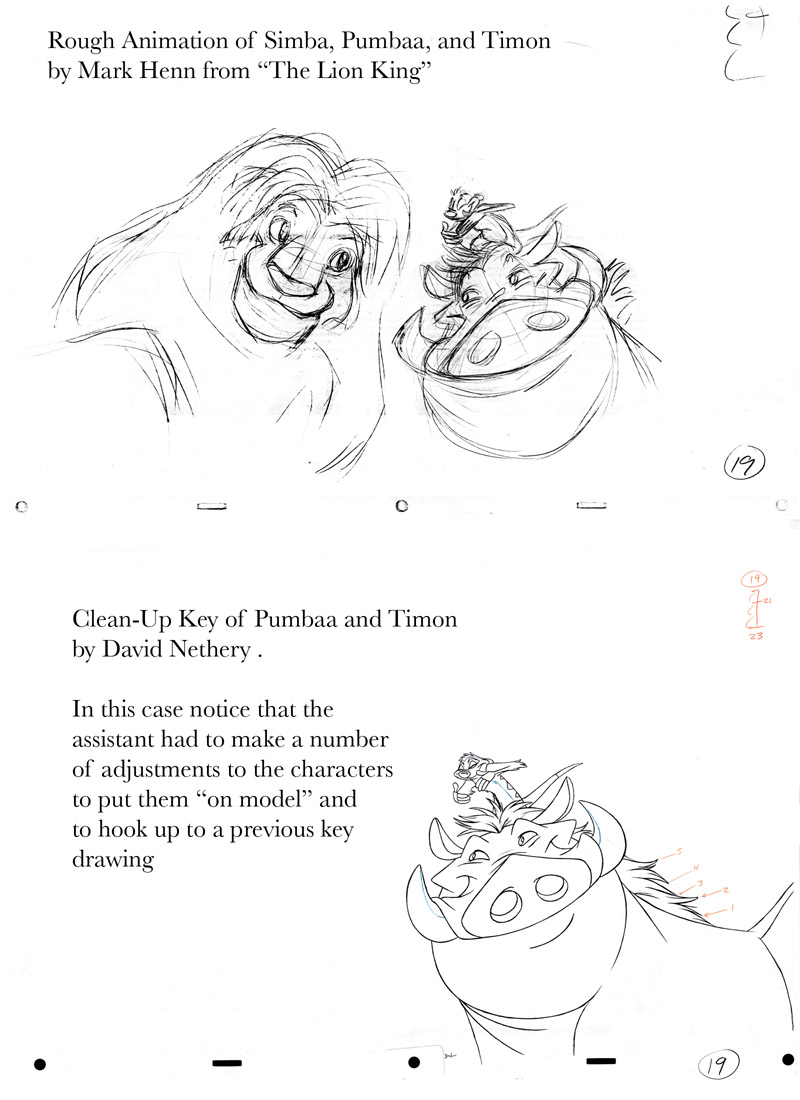 This animation comes in a much wider variety of flavors from the loose but beautifully drawn to downright chicken scratch! Regardless of which were talking about we will almost certainly require our own rough for part or all of the drawing. How you approach this is a personal choice and I work slightly differently from most of my counterparts.

As a general rule when most clean-up artists are approaching a redraw they will put a fresh sheet of animation paper over the rough, roughly sketch-in the character with a col-erase pencil, and then go over this again with graphite for the final clean-up line. Whether they choose to use a mechanical pencil or regular wood pencil is entirely down to personal preference, and I have seen astonishing line work done with both. Where I slightly differ is that I generally do not like drawing over the Col-Erase line, I personally don't like the feel of it and don't feel I get the best result. You see, animation paper from the main two suppliers (ChromaColour and Cartoon Colour Co.) is so smooth to start with, add to that the wax finish of the Col-Erase pencil and there is no "tooth" left to the paper. You end up with an artificial surface which I don't think the graphite sticks to as well. So what I tend to do is rough-out my first pass in graphite and then on a separate sheet go over that with a technical pencil. I also feel this way you tend to end up with a cleaner drawing. 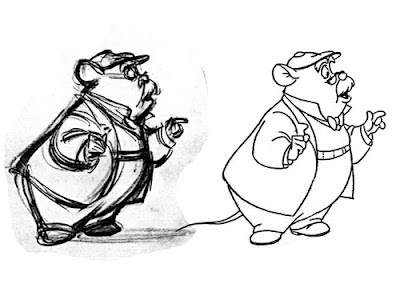 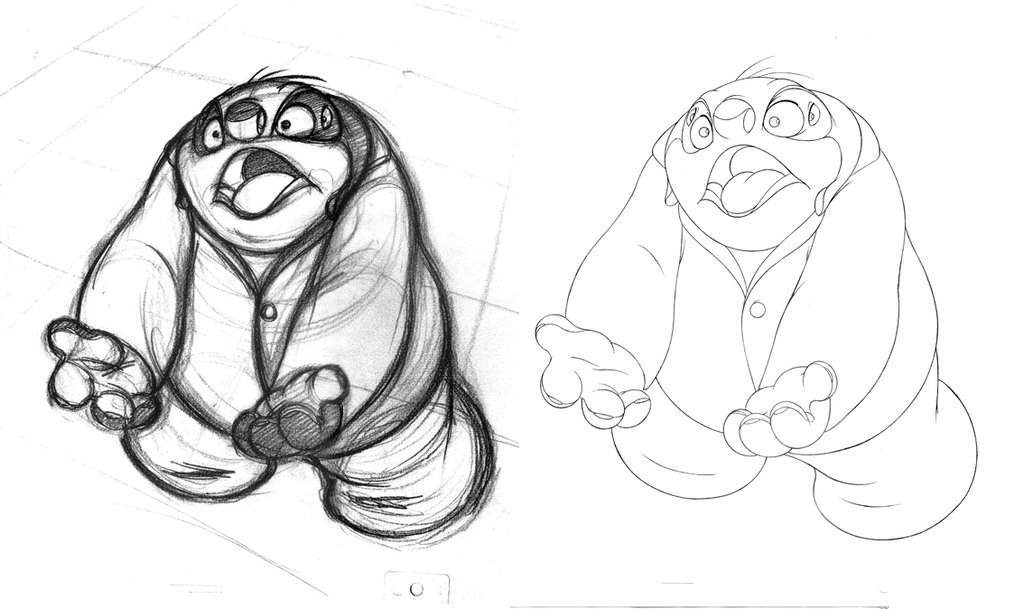 Getting into the nuts and bolts of clean-up is beyond the scope of this post, but I will at some point do some video demonstrations of how I approach the different facets of this craft.

So why do I call Clean-Up a craft and not art?

Well first let me give you some history.

I started in animation at a young age (around fifteen) cel painting at commercial houses around London. Despite having no formal artistic training I did learn enough on the job to find myself as a clean-up inbetweener within a year or so. Although as a child I had drawn I was hardly prolific and my drawing was weak at best. Anyway, I worked at a few different studios inbetweening and at seventeen came over to the States to work. Because of necessity and in hindsight probably prematurely the studio made me a Key Clean-Up artist, a position I held (albeit at different studios) for the next nineteen years. Anyhow about two years ago I was working on a feature in Pasadena and started to reflect on the fact that after nearly twenty years in animation I had never made that leap into animation. I approached the director and explained my situation and was very graciously offered some background animation to have a go at.

So as I got into it I realized I was stuck! I didn't know how to really draw. I understood all the principles and applied them daily to my work in clean-up but when it came to drawing from the imagination I didn't know where to start. There was no safety net. Anyhow I crawled my way through that first animation and although the animation was approved ( I think he was being nice,) I was very unhappy with it and frankly embarrassed. It was the best thing that could have happened to me.

As soon as that feature was over I went to school, in many ways for the first time. I started drawing for myself for the first time in twenty years. I went to figure drawing, took classes on perspective, studied cinematography, took storyboard classes, animal drawing and color theory and basically studied the whole gamut of skills required for animation. I continue to study in these areas and am sure the study will go on for a long time to come, I hope so.

Anyhow, enough of my life story ...

The point is, that over time I was able to learn a set of skills that allowed me to do a job, but I feel as a Clean-Up artist you are in fact more a technician (craftsman) than anything else. The fact that you are drawing on a daily basis really has very little to do with your ability to draw, or lack of ability to draw. Clean-up uses a different set of drawing skills to rough animation, the most notable being that in rough animation you are drawing purely from your imagination. And this is a biggie! For in itself it requires several different disciplines. This is not to say there aren't some very good draftsmen in Clean-Up and it certainly does require a highly refined set of skills, but I think the point holds true.

At it's best Clean-Up can bring a new dimension to the animation and at it's worst it can destroy a thing of beauty. "

Gorgeous clean-up drawing by animator James Lopez over his own rough drawing from a personal project he is working on: 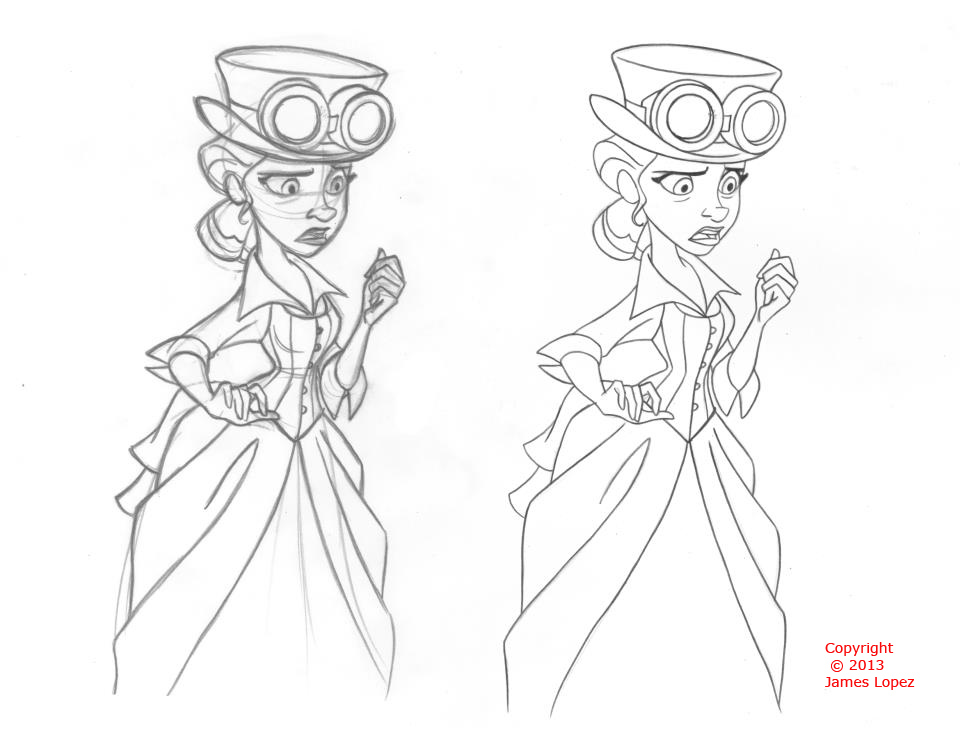 I already saw this article and think it is an excellent post on cu and its technicalities. It's about time it receives some light, so many take it for granted and also the people working within it. Rough animation is over-appreciated. Thanks for the examples, looking at cu is a joy seeing all that delicate detail in comparison to their rough counterparts. Post more if you can!

Keep up the great blogging.
Sarah

I am a student of animation, and I do a clean up documentation.
Unfortunately I have very little documentation on this étapte.

I need to know how the artistic director decides to apply a particular style clean up.
How does the clean up has changed over time.