Hans Perk has pulled another magical relic from animation's past out of his magic hat:

A c.1936 lecture given at the Disney Studio by animator Dick Huemer on Timing. Read it here ---

This stuff is gold. Read it . Then read it again. Apply. Repeat.

Actually I need to correct myself : I said it was a "relic" from animation's past, but that gives the impression that it's just a piece of history ... but as Hans Perk points out :

"I feel I need to point out that the things discussed here still hold true today, also in computer animation. A principle is a principle, whatever the medium. If we do not learn about the successes and failures of yesterday, how can we be sure we make the right decisions today? Don't mistake these documents for "funny old stuff." If you are employed in the animation business, know that they are part of the groundwork of what pays your salary today!"

This is the real stuff , friends. While you're there make sure you bookmark Hans' blog A-Film L.A. and check out the other Disney lectures and material he has posted on his blog.

Two relevant documents which relate to the Dick Huemer talk on Timing are the scene drafts for the short films "Mickey's Polo Game" and "Alpine Climbers" :

A scene draft was (is) a studio document prepared to show which animator was assigned to what scenes and the scene
lengths in terms of scene length footage (35mm motion picture footage) . A draft is made for each short or feature film . 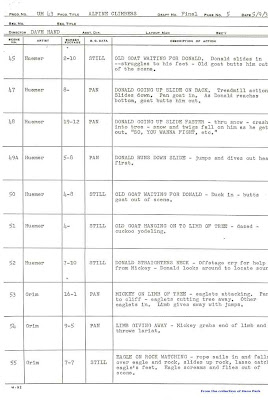 "It's the Cat" by Mark Kausler

**NOTE: this film is unfortunately no longer available for download from the MyToons website as MyToons abruptly shut down recently.
The full pencil test of "It's the Cat" is still posted on Mark Kausler's site, so be sure to check that out .  Hopefully Mark will find a new home on the web for "It's the Cat" soon. 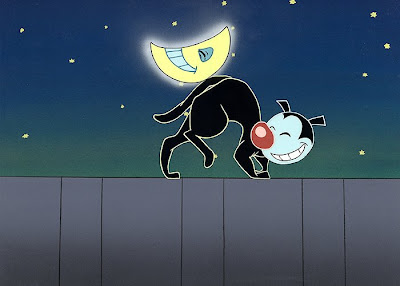 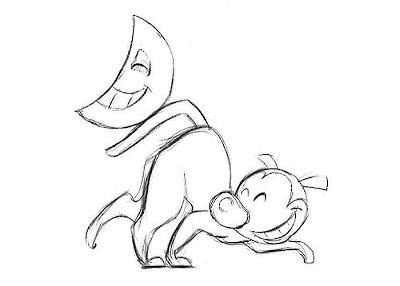 This film was a labor of love for Mark and his producer Greg Ford. It's all hand-drawn, hand-inked and painted on cels (that's right cels , not digital ink & paint) .

They're making another one called "There Must Be Another Cat" which Mark tells me is finished in pencil test, but is still being inked and painted as funds become available .

Help support independent animators like Mark Kausler and buy "It's the Cat" on Mark's MyToons page for the mere pittance of $1.99.   (as of 4/7/09 - NOT CURRENTLY AVAILABLE due to the abrupt shutdown of MyToons. )

Here's a short preview of the title sequence:

UPDATE: Mark Kausler has posted a very illuminating answer to a question about how he approached animating to the music on his film "It's The Cat" . Check it out:

Mark Kausler on Animating to Music . 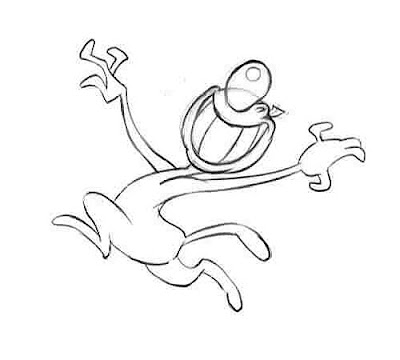 All images from "It's The Cat" copyright ©Mark Kausler.

UPDATE #2 : Mark has posted the complete pencil test for "It's the Cat" on his site: It's the Cat Pencil Test --Click HERE --

I love watching pencil test animation . It's fun to compare the rough version to the finished film. View the pencil test and then buy the film on MyToons (only $1.99) .

Mark is also selling the original , one-of-a-kind hand inked & painted CELS from the film. These are not the fake "gallery cels" that many places sell to collectors , these are the actual production cels that passed under the camera and are on screen when viewing the film. If you buy a cel you also get the original pencil drawing and he's throwing in a DVD of the film with each purchase : It's the Cat - Original Hand-Inked Cels -- Click HERE --
Posted by David at 3:26 PM No comments:

"Dear Anna Olson" is a hand-drawn animated film being made by Dean Kalman Lennert .

Check out the links to Dean's site for more info. about how he's making this independent 15-minute short film and to see screen grabs and clips.

Here are a couple of things about the film posted on YouTube :


A few quotes from people who have seen the work in progress:

Dean Lennert's 'DEAR ANNA OLSON' is one such film, which upon completion, is sure to remind all about the elegance and power of hand-drawn animation when it is in the hands of a modern master such as Lennert."
-David B. Levy , Animation Director and Author of "Your Career in Animation: How to Survive and Thrive"

"Dean Lennert's subtle animation and narrative skills are on full display in 'DEAR ANNA OLSON' . This sensitive and emotional story, skillfully told through detailed and expressive moving drawings, is a work-in-progress deserving of your support"
-John Canemaker,   Academy Award winning animator/director and author of many
influential books on animation history.

This looks like a film worth keeping an eye on.