In this excerpt from the BBC series "The Secret of Drawing" (2006) director Sylvain Chomet (The Triplets of Belleville  and  L'Illusionniste ) demonstrates his approach to drawing for animation.  The work shown is an early test scene from "The Illusionist"  (released 2010) .

Students:  if you're not familiar with the work of Uli Meyer and his London animation studio  "Uli Meyer Animation"  you should definitely get to know his work.

In addition to his studio website , Uli has a couple of blogs where he posts his incredible pen & ink drawings :

A few samples of  Uli's work below.  Click on through to those links above to see more of his drawings. 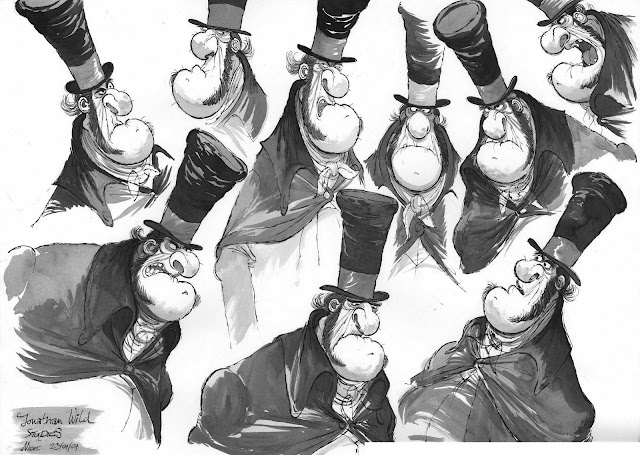 
Amazing animation test done in the style of Ronald Searle, based on Searle's St. Trinian's girls :

"On September 22nd I presented a 25sec animation test featuring a St. Trinian's schoolgirl to the creator of those classic British characters, Ronald Searle himself. Searle has had a few bad experiences when it comes to animation -his drawing style is extremely difficult to adapt and apart from a few short pieces of animation done by Ivor Woods in the 70s, he hasn't been impressed by any attempts. Nevertheless, I thought I'd give this a go and am delirious to report that he loved it! He even commented that it was the best he'd seen since Ivor: a truly wonderful compliment.


The original St. Trinian's cartoons are spot gags featuring the terrible killer schoolgirls and their teachers at the notorious, albeit fictional, boarding school. They commit murder, blackmail and extraordinary naughtiness against the backdrop of a supposedly more innocent era - 1945 to 1952.


There isn't a story. Searle's anarchic humor works as a single image -- not obviously lending itself to animation. Therefore, I picked one of the cartoons and added a little lead-up story.


Matt Jones and I boarded a sequence which was originally longer than 25 seconds and involved a massive crowd scene in the St. Trinian's dormitory. But I decided to keep it simple - it was meant to be a test after all. Based on the boards, I drew the layouts and posed the shots on 8s and 12s. The wonderful animation is by Sandro Cleuzo, who animated the first shot and Boris Hiestand, who animated the rest.


My job was to keep the whole project in the Searle universe. I drew the BGs onto frosted cel, each one five times to give the environments a slight boil. I then drew the character animation onto frosted cel with a mapping nib and black ink, trying to keep it as loose as possible whilst putting the characters on 'Searle' model. The animation is mostly on ones and I managed to get through 40-50 drawings per day. Helene Leroux, a very talented young French artist, traced the last shot. Loose lines further produced the 'boil' effect, which goes well with the Searle style.


The drawings were then scanned and composited by Michael Schlingmann in After Effects. Michael figured out a complex system of mixes to keep the multiple background drawings alive and in style with the lively lines of the animation drawings. We added a mix of existing music to the edit, hoping the composers won't mind since this is not a commercial project. The little film was great fun to put together - a welcome opportunity to remember those dusty 2D animation skills." 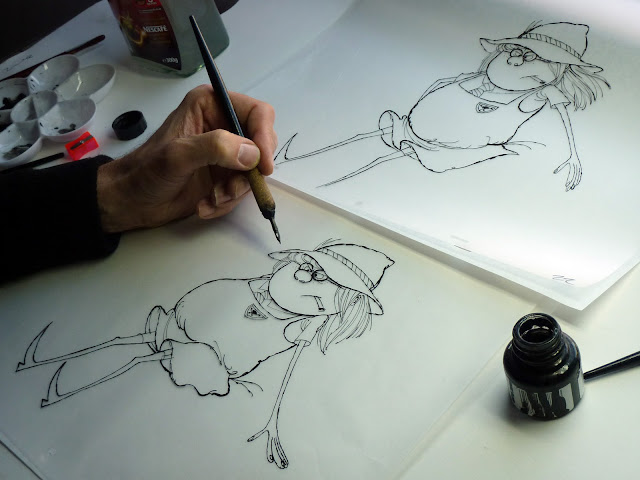 "One More Time" by Alexander Petrov

A recent film supervised by Alexander Petrov , "One More Time" . (all of these images are hand-painted with oil paint on glass, one frame at a time.)

Roughly translated (by Google) from a Russian language page I found with information about the film:

"The film "One more time!" - is a moving memory of the finest part of every person - a carefree childhood. The action takes place in Yaroslavl, 1930. The authors managed with great precision to convey the atmosphere of that time.

The film "One more time!" is the graduate work of young animators. Its authors - Alina Yahyaev, Ekaterina Ovchinnikova, Tatiana Okruzhnova - in one -and-a-half years have created a film under the guidance and in co-creation with the teacher, Alexander Petrov.

Alexander K. Petrov - a famous animator, film director and artist. Member of the Union of Cinematographers of Russia, member of the International Association of animators ASIFA, a member of the American Academy, an honorary member of the Russian Academy of Arts. Winner of two national awards (1990, 1995). He was awarded an Academy Award in 2000 for his film "The Old Man and the Sea." Alexander Petrov, creates its own unique films in the technique of oil painting on glass."

For my Academy of Art animation students I've been remiss in not officially noting that my friend and colleague Diana Coco-Russell has joined the Academy of Art University as the on-campus Associate Director of 2D Animation.   In addition to her work on-campus at AAU , Diana also teaches for 2D Animation Online (ANM 610.OL Figurative Concepts and ANM 611.OL Visual Elements of Story ) .

Diana Coco-Russell has spent most of her artistic career in animation, with her longest run at Walt Disney Feature Animation as a clean-up animator. Beginning with Beauty and the Beast in 1992 and ending with Home on the Range in 2003 her credits appear on most films from that decade.

Known as Diana Coco in the industry, she began her career doing layout/story boards for Filmation on the Lone Ranger/Tarzan TV series, later moving into clean-up animation working on He-Man and Bravestarr.  Having graduated from Art Center College of Design in Pasadena as an Illustration major, she found she preferred the camaraderie of the studio atmosphere to the life of a freelance illustrator. After Filmation folded she went back to UCLA and received a Master’s in Education. Teaching Biology and running the Yearbook class could not match the call of creativity found in feature animation and she returned to the entertainment industry by starting up with Disney Feature Animation in Burbank.

While at Disney she met Walt Stanchfield, who was conducting bi-monthly Gesture Drawing classes for the entire studio. Walt made a huge impact on Diana with his challenge to create and craft powerful drawings with life and simplicity. The call to draw the figure in poses so clear that they ‘spoke to the balcony’ was irresistible. She took Walt’s drawing philosophy ‘on the road’ teaching figure and gesture drawing classes at a variety of institutions including the local Hollywood animation union, Santa Monica City College and Laguna College of Art & Design. Diana continues to ‘coach’ drawing and animation in a variety of venues while pursuing her other interests - plein air painting, animal drawing and riding horses with her husband and friends.

You may view our other current online  "2D"/Traditional Animation faculty at this link:

Animator Frans Vischer has written and illustrated a new book, "Fuddles" .     He animated this charming trailer to promote the book.


And check out Frans' other book "Jimmy Dabble" -

I'm grateful to  C. Siemens on the Don Bluth Animation Forum for directing my attention to this remarkable collection of pencil tests by animator Tahsin Özgür.


"For a while my wife, Lale, had a company through which I did some of the best of my animation work. This "animated logo" was meant for that company, but by the time I was finished with the cleanup, she had already closed it down! The model is Lale, of course!"

Here is a short film prepared as part of an exhibition of animation at the Apel Gallery in Istanbul. The format is a "silent movie". Starting around the 00:35 mark it has an amusing "day in the life of an animator" sequence , in which you get a glimpse into Tahsin Özgür's animation work process (continuing my recent theme of posting videos of Master Animator's At Work) , with bits of his animation interspersed with scenes of him drawing at his animation table -

This was prepared for an exhibition at the Apel gallery in Istanbul in 2001. 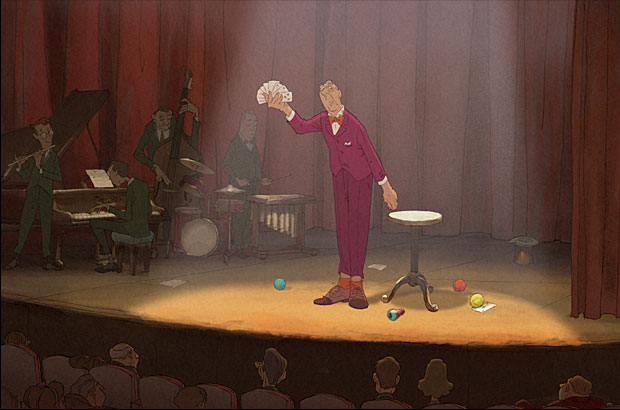 Last year I made several posts about Sylvain Chomet's new animated feature , The Illlusionist  ("L'Illusionniste") .
Time to mention it again.


Now that the film has received an Academy Award nomination as "Best Animated Feature Film"  and is in a somewhat wider release pattern I wanted to post the release schedule from Sony Classics.   Here is where the film is currently playing or will be opening soon:

If the film is playing in your city or close-by I highly recommend you see this sumptuously animated film.  Especially if classical hand-drawn animation is something you are passionate about then you  owe it to yourself to see and support this beautiful, poignant film on the big screen.

Here is the North American Trailer -

(I suggest that you switch the video settings to HD , watch full-screen).

Here is some artwork from the film:


Production Drawings & Backgrounds from The Illusionist


Pencil Tests from The Illusionist

Excellent review of the film by Mark Mayerson:


"The Illusionist" a review by Mark Mayerson


"The Illusionist"  reviewed by Roger Ebert

The North American (Sony Classics) website for the film:

Sylvain Chomet at the animation table - 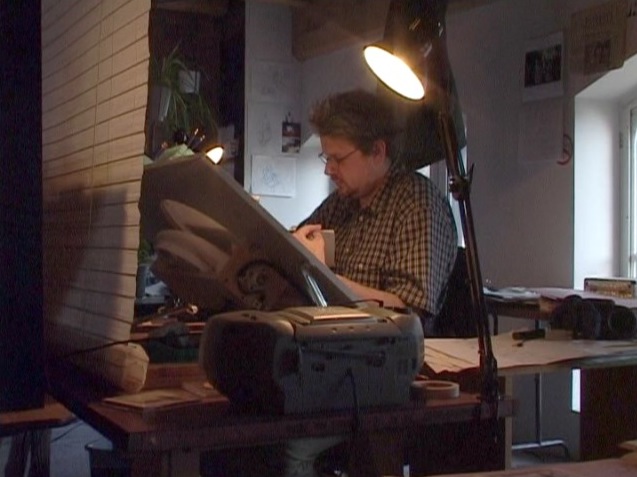 These have been shared on a lot of blogs ,  but for completeness sake in this series I'm re-posting them here.


A great lecture (in three parts) by Glen Keane on his approach to animating a scene.   You can learn so much by just "looking over the shoulder" of these great animators as they animate.


*NOTE:  Sorry, I can't embed the video here.  You'll have to go to the AAU Videos web page and scroll down through the list of videos to find "Eric Goldberg".  Click on Eric's name to launch the video.

Master Animators at work. It's always interesting and educational to see how an animator approaches animating their scenes.


First up, the amazing Joanna Quinn . 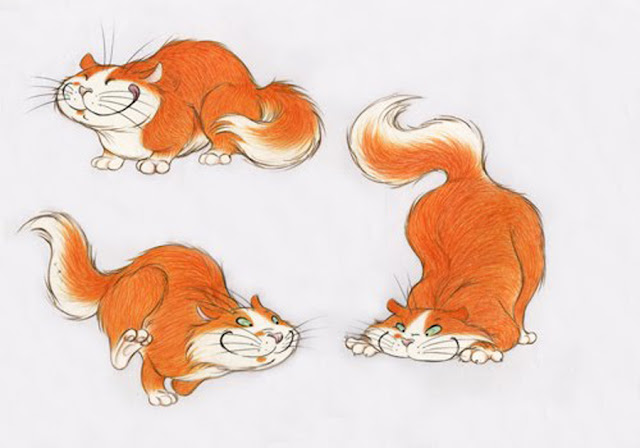 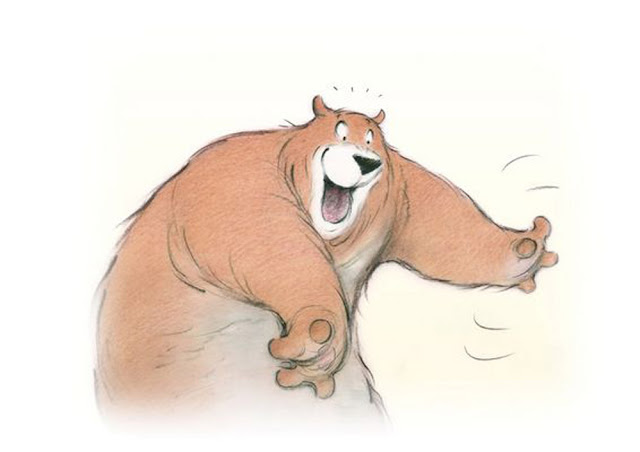 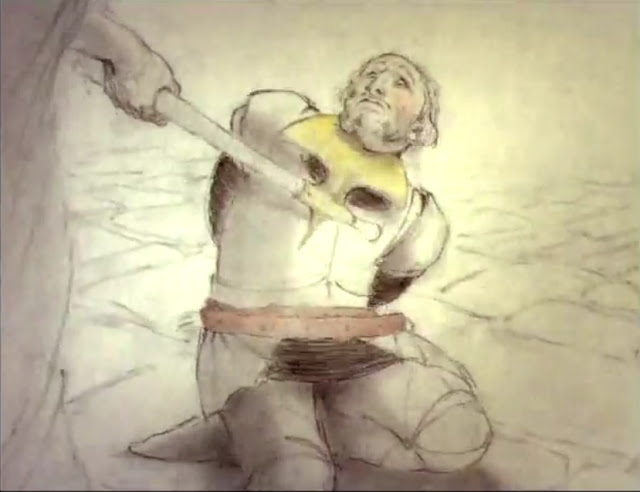 Here are a couple of samples from the tutorial, including some things NOT to do : 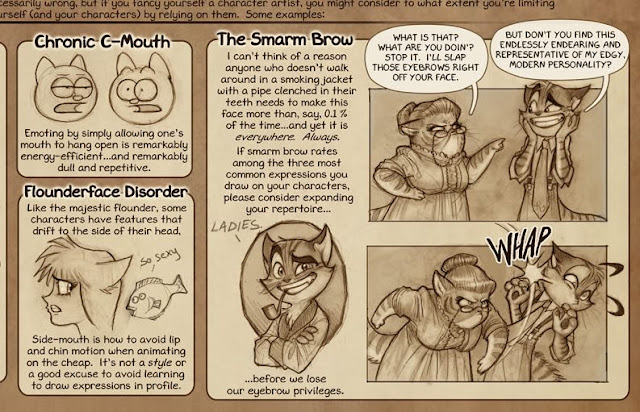