Sorry to hear that Michael Sporn's  Kickstarter campaign to raise money for his animated feature-film  "POE"  didn't reach it's funding goal.   (see the post below this one)   I supported it and I urge you to do the same if Michael starts another fund-raiser  , which it sounds like he may do soon.   I hope he keeps moving forward with it.

This doesn't have a KickStarter page , but if anyone is looking to support a worthy hand-drawn animation project check out the latest post on animator Mark Kausler's  "Cat Blog" :

Mark already made the brilliant hand-drawn short  "It's the Cat" a few years ago and has completed animation on his next Cat film "There Must Be Some Other Cat" .

The pencil animation for  "There Must Be Some Other Cat" is finished (Mark showed the pencil test to me at CTN; it's great stuff !)  , but the new film is still slowly inching it's way to completion in color.    It's being done entirely traditionally , so it's hand-inked and painted on actual cels and then photographed on the last working Acme 35mm camera stand in New York City .  (owned by the producer of the film, Greg Ford) .

Like I said, they don't have a KickStarter page, but Mark is selling the hand-inked Cels from the first Cat film to raise money for finishing the new Cat film and also has set up a PayPal account to take contributions from anyone who wants to help finish the film. See his blog post linked above for contact details.

Here are the cels they currently have for sale:

I purchased this beauty: 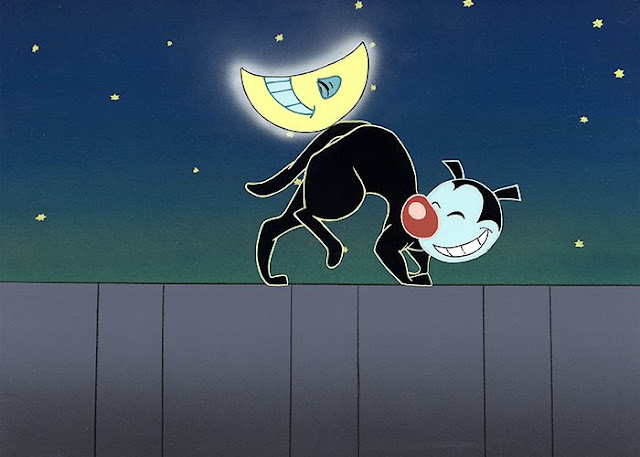 (actually one very similar to this one , not this exact frame .  This is from the cel gallery on Mark's website) .


Buy a cel or make a contribution if you support independent animators committed to making hand-drawn animation.    The hand-inked and painted cels are beautiful examples of a craft that is now virtually extinct.

By the way, you can watch the full  PENCIL TEST  of Mark Kausler's first Cat film,  "It's the Cat"  on his website, here:

Labels: Greg Ford, hand-drawn animation, hand-inked cels, Independent Animation, It's the Cat, Kickstarter, Mark Kausler, There Must be Some Other Cat

The Story of Animation - an educational film

I saw this posted on the TVPaint Animation Forum.

Nice, humorous (slightly exaggerated) explanation of the production process.  Made as an educational piece for clients wanting to use animation who know nothing about the way animation actually produced.    A lot of production was done by students at  The Animation Workshop in Viborg, Denmark  --

The Story of Animation from David Tart on Vimeo.

The Story
The film follows the journey of "You" (the main character), a 3rd-tier technical writer who dreams of one day being a product designer. Working after hours, he creates a fantastic new product. When he presents his product to his employers, they inform him that it's up to him to create an advertising campaign for the product - an advertising campaign that must be animated. This poses a problem for "you" - he knows very little about animation, and is instantly filled with doubts, and thus his future hangs in the balance. This is where our friendly narrator steps in, to guide "you" through the process of making an animated film. Step by step, our hero's anxiety and doubts are put to rest, and in the end, he is triumphant!

The Production
The Story of Animation came about as a solution to a problem: The Animation Workshop, an animation school in Viborg, Denmark, had been graduating a great number of incredibly qualified animators, animation producers, and CG artists over the past 10 years. These artists had been forming small companies and beginning to produce fantastic work. The problem was not with the studios, or the quality of work they were producing, but rather with the clients: Most of them seemed to believe that animation was a simple, uncomplicated process, and were often disappointed to learn that there were very specific stages in the animation process that required their participation (and finances). It's almost as if they believed that creating animation was as simple as pitching an idea, and then sitting back while a couple of animators with pencil and paper goofed off, told jokes, and drank copious amounts of coffee until "wallah"! the animation was finished! Furthermore, they seemed to think that there would be no difference in cost between an animated film created in flash, 2D, stop motion, cut-out, motion graphics, or fully rendered Pixar-style 3D animation! At the time Morten Thorning, Director of the Animation Workshop approached me with the idea for the film, I was experiencing similar problems with a client in Copenhagen. In fact, I'd just spent several days creating a presentation about the benefits of using animation for an environmental messaging campaign. I was tasked with convincing a panel of scientists, sociologists, environmental activists, and architects how animation could be used to create positive, engaging, and entertaining content for environmental action messaging - no small feat!

The Team
After talking things over with Morten, it was decided that I would write and direct the project, which would be produced by Claus Toksvig of The Animation Hub, and animated at Tumblehead Studios. Tumblehead, led by Magnus Moller, did an amazing job on the film, assembling a team of character designers, animators, storyboard artists, and background artists (all graduates or current students of the Animation Workshop). Tumblehead saw the entire process through, from concept to post-production. The narrator was voiced by the awesome Richard Spiegel, and the sound design and score created by Mark Menza, whose many credits include sound designer and composer for "The Jimmy Neutron Show". Additional support was provided by Thomas Ahlmark (a veteran of many Animation Workshop productions).
Posted by David at 2:57 PM No comments: