Character Concept art © Erin Humston.
Animation students pay attention:
Here's an inspiring example of an independent animator, Erin Humston, developing and selling his own work directly through the iTunes Store . I hope this is the sort of thing that many of our present day students will be thinking of doing (i.e. developing their OWN original properties) rather than just thinking their only option is "I'll graduate from school and then just go to work for Big X_______ corporate studio". Nothing wrong with that and it's a good way to learn the ropes in the business, but while you're paying your dues toiling away at Big Studio X always be working on developing your own ideas and characters , and thinking of ways to market your work so that it benefits you directly. (something that will support you , not just put more money into the coffers of Big Studio X.) 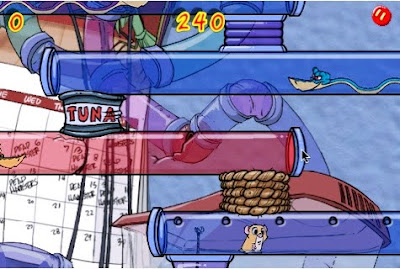 No one knows for sure where hand drawn animation is headed - but one outlet seems to be thriving: mobile video games.
Here’s another for the list of intriguing new 2d-cartoon iPhone games: Run Hamster Run.
Erin Humiston did all the artwork and animation, and produced the game with a handful of people in Orlando, Florida. The animation is all hand-drawn.
It’s now available at the iTunes store. Here’s a sample: 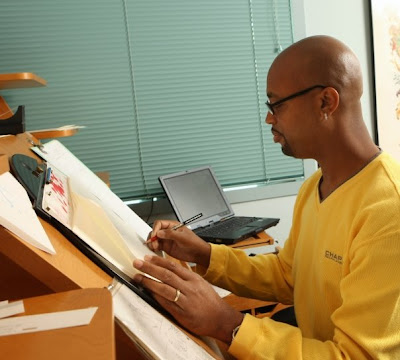 (lead animator Bruce Smith, animating on
The Princess & the Frog)
It's been 6 years since Disney has released a hand-drawn animated film. Going into wide-release this Friday, Dec. 11 - The Princess and the Frog.

The time to go see this film is opening weekend , Friday Dec. 11 or Sat. Dec. 12 would count the most, through Sunday Dec. 13 is fine too .
The opening weekend box-office numbers will count for a lot as to whether Disney's return to hand-drawn animation is perceived as a hit . (and hand-drawn animation could use a genuine, revival-inducing, Little Mermaid-like hit right about now).
So far the reviews have been overwhelmingly positive. Let's hope the general movie-going public agrees.

The Princess and the Frog

“Musker and Clements have bucked the odds and made a cartoon feature that is true to vintage Disney traditions (like wishing upon a star) yet moves with a contemporary verve and bounce. In an amazing year for animation, The Princess and the Frog is up at the top. “

AAU animation students, attend the annual AAU School of Animation Fall Animation Festival , held this year on December 4, 2009.
The special guest speaker will be Disney supervising animator Nik Ranieri.
Nik Ranieri is equally at home in CG Animation ("Chicken Little" "Meet the Robinsons" , "Bolt") as well as Traditional Hand Drawn Animation. He has been the Supervising Lead Animator on many Disney feature films. His latest role has been as the Supervising Animator on the character "Charlotte" in Disney's newest hand-drawn animated film "The Princess & the Frog" .
(see Nik Ranieri IMDB )

(from the National Cartoonists Society web page)
Posted by David at 11:06 PM 1 comment: