A post I made on my personal blog a while back, but I'm reposting here for your viewing pleasure . This is really masterful work.

Here is a beautifully animated piece by Eric Goldberg, recently posted on YouTube, so if you missed it when it was broadcast here's your opportunity to see it.) 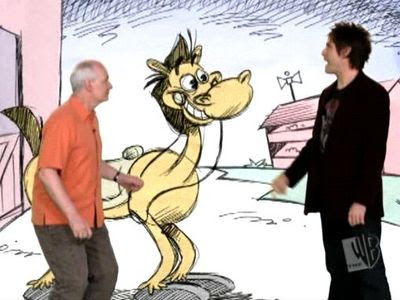 There was a clever show on for a while called "Drew Carey's Green Screen Show". It featured Drew Carey as the host , and an ensemble cast of improv actors doing skits in front of a "green screen" . After the live actors had done their stuff , the footage was handed over to various animators (coordinated by Acme Film Works) to embellish the skit with animation. The show never really took off , and like all improv sketches there were hits and misses . One of the hits, in fact probably the strongest piece that came out of this show, was a sequence called "Racetrack" animated by master animator Eric Goldberg. 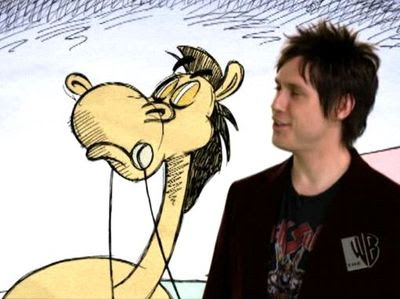 In an article on Animation World Network there is a bit about the production process they used on the piece . I was interested to note that they used Mirage for the ink & paint. Notice how the drawings have a beautiful, organic hand-colored look , like watercolor washes or markers.

According to the article :

Without pre-sketching or testing, Goldberg animated with ink directly on paper, working in a style he was comfortable with, allowing for a certain amount of boil and spontaneity. He wanted the game's horse character to have the same scratchy, rubber-hose freedom of the Fleischer and Krazy Kat cartoons.

Goldberg was committed to putting in as much technical detail as possible, such as the secondary action of the horse's reigns (animated by Todd Jacobson), because it makes the piece more convincing and compelling to watch. Goldberg feels this added effort adds a quality and touch that really sells the whole illusion.

There's more in the linked article from AWN , so take a look . I think that the Racetrack segment from Green Screen is as fine and funny a piece of animation as you're likely to see , so just for the pure enjoyment factor I wanted to share this . Someone was kind enough to post it on YouTube , so here 'tis :

(Note: the application called "Mirage" is no longer available as such . The company that used to sell Mirage , Bauhaus Software, no longer sells it . However the software development company that originally developed Mirage has taken over and is now marketing a much improved version of Mirage as TVP Animation. Check it out. I have also posted an entire blog with links to examples of work done with TVP Animation :
TVP Animation Blog.

Jerry Beck at CartoonBrew.com reminds me that I should post a link to Mike Nguyen's blog , Rainplace .

If you don't know who Mike Nguyen is you really should .

His company July Films , is making an independent animated feature "My Little World" . I first met Mike back on The Little Mermaid .
He has gone on to be a supervising animator on such modern classics as "The Iron Giant" . For the past 5 or 6 years he's been working on his personal feature film "My Little World" , while taking on contract work from other studios to pay the bills .

You will definitely find some things worth reading and watching on either of Mike's two websites, the blog Rainplace or the My Little World site. 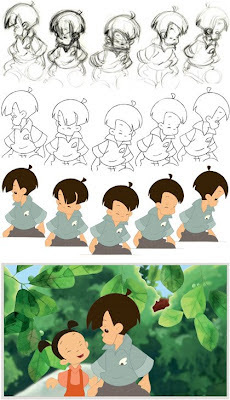 A good example about how character animation is all about timing , not fancy graphics or camera moves. This gets a lot of mileage from pure charm and keen observation of real life , with a very simple art style.


Also of interest, Kevin Koch (one of James Baxter's assistants at Dreamworks) has posted several pencil tests that James did for the movie "Sinbad" .