Another of our AAU Online instructors, the fabulous Jennifer Gwynne Oliver, has started up a blog for her Character Design & Drawing for Animation classes (ANM 364 and ANM 633).

Jennifer has already posted some great examples and will be updating it every few days, so bookmark it and check back often: 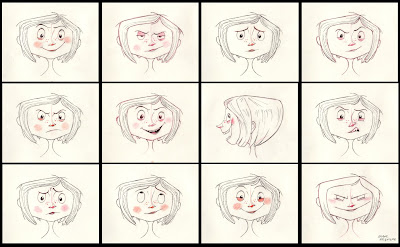 "The Monkey and the Elephant" by Boris Maras

The Monkey and the Elephant by Boris Maras, Sheridan College 2010.

He animated this in 2 months.

"Keeping my film rough was a big decision. Amanda and I were both considering cleaning up and colouring our films, but we would have had to rush the animation so much and we really wanted to learn as much as we could about animation. Keeping them this way, I think we learned a lot about our limits and we have a way better idea for how approach a short film now.
The idea for my film was pretty different up until February, the characters were pretty much the same but the situation they were in was different. It was risky because I had to throw away the animation I had already done and around 25-30 layouts, but I think I made the right decision for what I want to pursue.

I started animating around the middle of February and animated up until our deadline of April 19th. It was the craziest 2 months of my life but I'm really happy with the amount that I learned during the process of making my film and hope I can make another one soon."

Slim Pickings Fat Chances is a student film by David de Rooij and Jelle Brunt from the Willem de Kooning Academy in the Netherlands.