Where are all the Traditional Hand Drawn Animated films ? (and why study traditional animation?)

When people make the claim: "There are no traditional animation jobs" or "2D is dead" you should realize that what they mostly mean is that the model of big-budget feature length 2D Animation that flourished for a time in the U.S. film industry from roughly 1985 - 1999 and then finally crashed and burned in the years between 2000 - 2003 (for a variety of reasons, both economic and artistic, too complicated to go into here) is no longer viable.

Yes, perhaps that particular model of traditional animation production is "dead" (or maybe "just resting, pining for the fjords") and is not likely to come back the way it was in the 1990's. There will continue to be hand-drawn animated features , but those will probably be for a niche market , smaller indie films, not necessarily major feature animated films like 'Beauty & the Beast' , 'Aladdin', 'The Lion King' , or even slightly smaller scale films like 'Lilo & Stitch'. It's possible that there could be a break-out hand drawn animated hit again on that scale , but it doesn't seem likely, at least not in the short run. (but never say never ... things couldn't have been much more "dead" than in 1985 - '86 when a couple of films came out that I think changed everything: The Great Mouse Detective and An American Tail . Momentum picked up after those , leading to Who Framed Roger Rabbit, The Little Mermaid and beyond ...)

BUT that is not the only viable model of traditional hand-drawn animation production , and it never was the norm. Hand-drawn animation doesn't need to be "saved" or make a "comeback" , because it never really went away. I think there will continue to be smaller scale feature films like "The Secret of Kells" or "The Illusionist" , as well as more truly independent micro productions (one-person , creator driven features or features made by a very small crew) such as "My Dog Tulip" , "Sita Sings the Blues" , "Idiots & Angels" and Nick Cross's forthcoming "Black Sunrise"

There is so much hand-drawn animation still being done for advertisements , short films, games, and web applications (including iPhone/iPad and other tablet apps). And whether it's drawn with pencil on paper or using a Cintiq tablet in an app like TVP Animation , the traditional drawing-based skill sets are still essential to telling a story through images.

Here are a few projects I've seen recently which remind me of how hand-drawn animation is being used in the real world outside of mainstream "Hollywood" features:

"The Music Scene" from Anthony Francisco Schepperd on Vimeo.

These are just a few randomly chosen examples from among many. IF you can think beyond "When I graduate I've got to go to work at a giant studio like Disney/Pixar/Dreamworks/BlueSky/CartoonNetwork/Nickelodeon " [not that there's anything wrong with that] you can find a world of opportunity out there for animation. (in particular the hand-drawn variety) .

CTN Expo - Behind the Scenes with Independent Filmmaker Mike Nguyen

Here is another inspiring video from a presentation given at the CTN Animation Expo .

If you haven't attended CTN Expo before it is highly recommended . CTN is only 3 years old , but has THE place to be for people interested in character animation.  This year's CTN Expo will be Nov. 18 - 20, in Burbank, CA.

Animator/director Mike Nguyen has been working on the independent animated feature film "My Little World" for many years now (working on it part-time between other jobs).


Mike Nguyen primary interest is the hand-drawn animation film making medium and aims to reflect beautiful thoughts toward this life on Earth.

Mike received his BFA in Character Animation at the California Institute of the Arts in 1988. Since then, he has worked primarily in the feature animation industry as a Character Animator in various studios, including Walt Disney, Warner Bros., and DreamWorks Animation.


Mike's blog "Rainplace" is one of the best animation blogs on the web.   Mike discusses the "how to" of animation in great depth, but also the "why" of animation , with a very creative/spiritual emphasis, using examples from his own work.

As in this post on "Rough Pass as Thumbnailing" where he discusses taking animation from a first rough pass to a "tied down" version of the roughs : 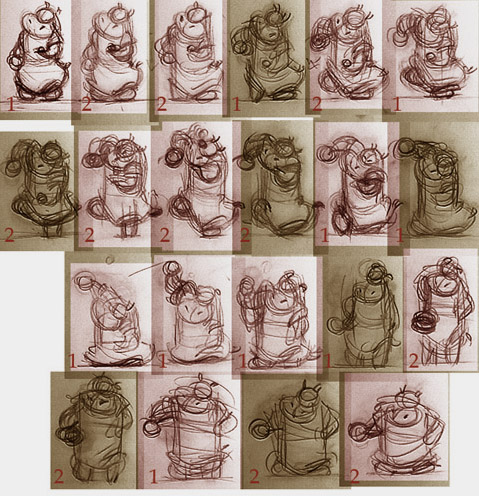 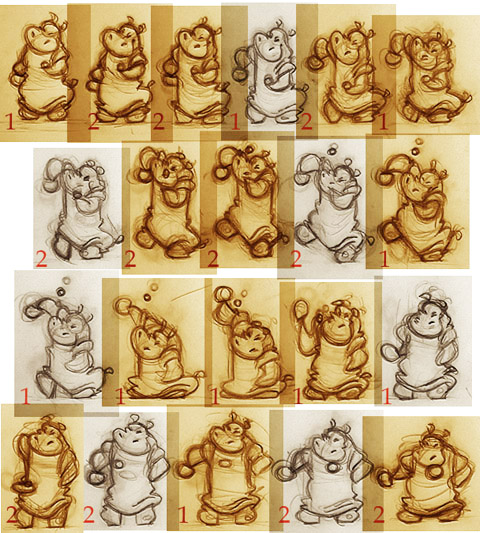 All Images Copyright Mike Nguyen/July Films. Go to his blog , "Rainplace" to see many more examples like this.